Two jackrabbits were milling around about a quarter mile down the partially overgrown and long abandoned dirt road. They had no clue that the fat and heavy 6mm Rem AI was aiming at them, with nothing but really bad intentions. It was their lucky morning, however, as some damn bush always shielded them from a potential 88 grain Berger hollow point. I had to leave my portable bench, and get closer.

About half way there, a coyote crossed the road, recognized the danger immediately, and wasted no time making it into the growth on the other side. Maybe a lighter rifle would have meant trouble? I pushed on.

After several minutes and another 100 yards or so I noticed one jack fleeing parallel to me at impressive speed. I got the rifle half way to the shoulder, and sure enough, a coyote followed. My shot was just behind him, inspiring the beast to immediately accelerate to absolute top velocity. As far as I could see glimpses of that predator, there was no drop-off in performance. Neither was there any drop-off in the ringing of my ears, the only casualty that morning thanks in large part to the muzzle brake.

On the way home that day I wondered about a ‘woods bumming’ rifle, with more power than a rimfire, but less ear bite than a .223. A few ideas immediately came to mind, like handgun calibers such as the .45 Colt, or downloaded midrange cartridges like the 30-30. Then the light came on!

A few years ago, JD Jones (daddy of the T/C-based handcannons, prolific wildcatter in general, and owner of SSK Industries) came out with a new number called the 300 Whisper. Now, what could be better for the eardrums? A few phone calls, some info from the SSK web pages, a visit to Van Horn in Gilbert, and my new project had been kicked off. The T/C barrel, Redding die set, and loading data arrived within 2 weeks, and the fun began.

A New Number
The 300 Whisper is a fairly small package, merely a .221 Remington necked up to .30 caliber. However, with .223 brass still aplenty in my garage, I opted to cut those off right below the bottleneck, forced them into the full-length sizer, and trimmed them to 1.375". The Whisper was designed with versatility in mind. With a seated bullet its overall length is that of a .223, and it therefore will function in an AR platform. In fact, the idea was to provide subsonic performance with a 240 grain(!) bullet, and about 7.62x39 ballistics with a 125 grainer. The photo below shows a .308 Win, .30 carbine and .223 Remington in comparison to one 300 Whisper loaded with a 110 gr RN bullet, the other with a 190gr Lyman lead slug. 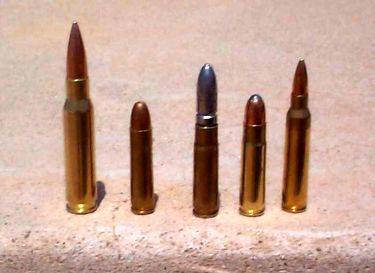 Initial testing was random, results interesting. The first 5-shot group with 8 grains of 2400 and 180 gr Sierras seated backwards (more on this later) was right at one and a half inches at the usual hundred paces. About the same accuracy came with 180 grain lead slugs (which Glenn was nice enough to let me try) and 7 grains of 2400. A third load, 125gr Remingtons on top of 20 grains of W296 also joined the "good load" club.

There was a demonstration of power. Early this year, when I learned that our Y2K military rifle shoot had been diverted to the rifle silhouette range, I loaded ten lead bullet (Lyman spirepoints, 193 grains actual weight) rounds fueled by 18 grains of AA1680, and arrived early at BASF. Almost still in darkness, a few rams were standing on their pedestals, and I barreled down on them. Luckily, I could see the dirt fly on my first two shot. Placing the appropriate mil dot just east of the ram’s butt, I touched off round three, and the steel beast went down in slow motion. Five more rams hit the ground that early morning. The Whisper has (ram) power.

Reality Check
With only 20 grains or less of powder to burn, the Whisper is certainly not a roaring magnum. However, it also does not defy the laws of physics, and will make noise proportional to how you load it. So, even with 3 grains of Bullseye it ain’t doing no whispering! The report is more like a .22 on steroids. Barrel length, or lack thereof, certainly plays its part here.

What is a Whisper good for? FUN, for sure! It is simply a pleasure to fire the darn thing. The light loads compare to rimfire enjoyment, with the difference that the bullet has more momentum, and therefore kicks up more dust. In other words, things happen when the slug arrives. While it can be loaded right at the heels of 30-30 performance, I seem to already have found my favorite use -- plinking with lead bullets. The Whisper with its small boiler room appears ideal for reduced loads, or inexpensive ammo for plinking.

As you may have read, I had decided to take it for this year’s javelina hunt, and it basically worked as intended. The light bullet (actual weight is 108 grains) from my Lee mold does have a decent-sized flat on its nose, and therefore seems suited for taking game. However, after seeing the 110 grain round nose perform on game, I see no more reason to fire up the lead pot. Those 110 RN pills aren’t that expensive at Midsouth.

After initial trials my favorite loads are Glenn’s 180 grainer with 6.5 grains of 2400, and another lead bullet, a 150grain Magnus Cowboy Action bullet sold by Midsouth, fueled by 4.3 grains of Bullseye. Both go subsonic (about 1040 fps), are fairly quiet. Most of my casual shooting will be with the 150 grain load, since it is fairly accurate, cheap and easy. For $15 per 500, I can’t see casting and sizing my own.

Further experimentation after the pig hunt revealed that the 110 grain round nose soft point is a wicked pill when propelled by 13 grains of Blue Dot. At a little over 2100 fps this bullet will do damage! The load has become my favorite for off-season bumming, and will be in the chamber the next time I’ll chase piglets. The 110gr RN is also more accurate than the Lee lead slug. In general it seems that Blue Dot is an efficient powder for the 300 Whisper when light bullets are used.

Load Data
About that backward boattail projectile: the theory is that this shape has less aerodynamic drag at subsonic velocities. The perfect subsonic shape is that of a water drop, and a boattail going bottom first approximates that pretty well. This means that such subsonic projectile will lose less velocity, therefore hit a far target with more energy. Well, that may be, but since I could tell very little difference by actually trying it, I abandoned the practice quickly in favor of the cheaper lead slugs. In the following table are some results of load testing after blasting them past Glenn’s Chrony.

A Minor Regret
The damn thing would be even quieter with a longer barrel than 18.5 inches. But those 18.5 inches make it so much nicer to carry in the field. This short Contender rifle has become a favorite off-season companion and plinker.

© Honeywell Sportsman Club. All rights reserved.
Back to Articles